Riteish Deshmukh and Vivek Oberoi starrer ‘Bank Chor’ has been released in cineplexes. The film revolves around the story of 3 nerds trying to rob a bank. 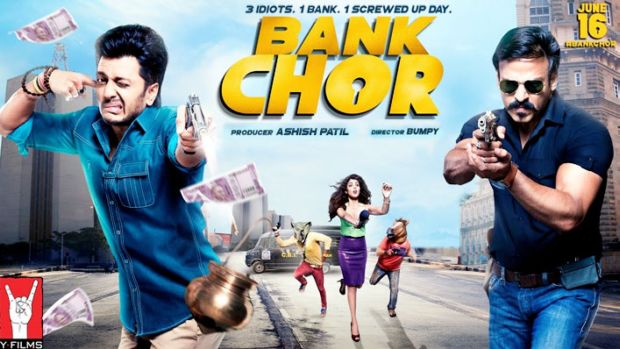 Story of the movie: The movie is about Champak (Riteish Deshmukh), who along with Gulab (Bhuvan Arora) and Genda (Vikram Thapa), has come to rob a bank. But their plan goes in a hole when police and CBI come to know about the robbery. While CBI Chief Amjad Khan (Vivek Oberoi) takes charge. He feels that behind this bank robbery, there is a big scam. What happened next is the heart of the story.

Star Performance: Riteish Deshmukh performs his role brilliantly and his comic timing is fantastic. Rhea Chakraborty has done a great job in the role of media person. While, Vivek’s role is fine. Baba Sehgal will make you laugh in his cameo as himself.

Music Direction: There is no song till the interval in the film. There is no need for them even further. Background score is good.

Direction: The film’s direction is superb. Cinematography is impressive. The director has chosen an interesting story and created an engaging screenplay, which entertains from the beginning till the end. But there are a few sequences especially in the first half that are a bit boring. But, the film’s pace in the second half is good.

Watch Or Not: This is a film which you can enjoy with your family.

Also Read : BC Rap Knockout : Mumbai Vs Delhi”: Boxer Vijender Singh & Riteish Deshmukh Fight For Their HomeTown In This Song!