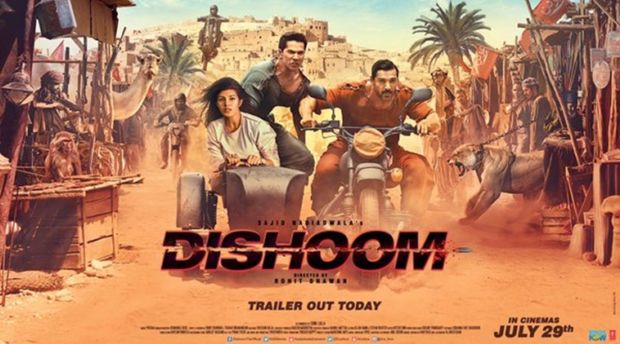 Director Rohit Dhawan’s film ‘Dishoom’ has been released in cinemas. As a director it is Rohit’s second film. Moreover, bollywood actor Akshay Khanna return to the big screen after four years. Akshay Kumar play a cameo in the film, which is one of the highlights of the movie.

Story of the movie: “Dishoom” is an action-adventure comedy film. Besides direction, Rohit Dhawan has also written story and screenplay for the film, which is a fictional story about the India’s top batsman Viraj (Saqib Saleem), who goes missing in Middle East, just before the final match between India and Pakistan. How two cops Kabir Shergill (John Abraham) and Junaid Ansari (Varun Dhawan) go for a 36-hour man hunt forms the crux of the film.

Star Performance: John Abraham, Varun Dhawan, Jacqueline Fernandez, Saqib Saleem and Akshaye Khanna have delivered good performances, which are the highlights of “Dishoom.” Superstar Akshay Kumar has played a cameo role, which is one of the highlights of the movie. Others have also done justice to their respective roles.

Music Direction: The film’s musical numbers were composed by Pritam Chakraborty. ‘Sau Tarah Ke…’ song has been already hit among the audience. Other songs like ‘Jaaneman Aah’ and ‘Toh Dishoom’ are very popular among viewers. If we talk about Abhijit Vaghani’s background Score, than he has done a good job.

Direction: The film ‘s story is not new. But because of the good screenplay it binds the audience. There are some humourous scenes that engage the viewers in the first half. The second half is also entertaining with some fight and romance sequences.

Watch Or Not: If you are fan of Varun Dhawan and like action- packed movies than this movie is for you.