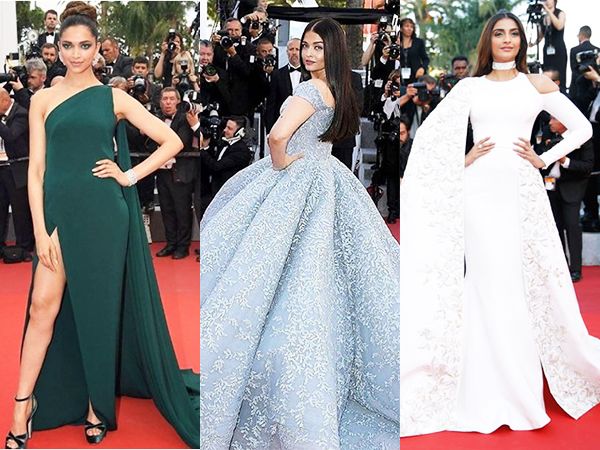 We’ve been getting to see Aishwarya Rai Bachchan and Sonam Kapoor walking the red carpet and treating their fans with fabulous looks at Cannes since years. But it was Deepika Padukone’s debut at this elite Cannes Film Festival 2017 and we all were anxious to see her don various outfits at the festival.

This year, Deepika was the first Indian to walk the Cannes red carpet and she owned it! She was at the par at everybody’s expectations and donned various looks at the event.

But soon after her appearances, she was compared to Aishwarya Rai Bachchan and Sonam Kapoor.

To which she was found saying to a leading web portal, “I feel it shouldn’t happen. This is an incredible platform to showcase our talent and represent a brand or movie. We all are such strong individuals and I don’t see any overlap.”

Deepika also gelled up really well with other Hollywood celebs like Julianne Moore and Susan Sarandon on the first day. And she said she’s always going to cherish that moment. She said, “At 7 am, we were getting our hair and make – up done.What I enjoyed the most was that we all are celebs, but in that room, we were three women giggling, chatting and being real.”

She also spoke about the image of Indian cinema at Cannes and said, “Susan was talking about her son picked up a dance element from Indian films and incorporated in his film.I know all our movies are not just about song and dance. Though people are aware of the kind of films we make, there’s a lot to do in terms of educating them.”

On Deepika’s professional front, she’ll next be seen in Sanjay Leela Bhansali’s period drama ‘Padmavati’ with Shahid Kapoor and Ranveer Singh in pivot roles too.

Also Read – The Breathtaking Looks Of Deepika Padukone In The Cannes 2017!