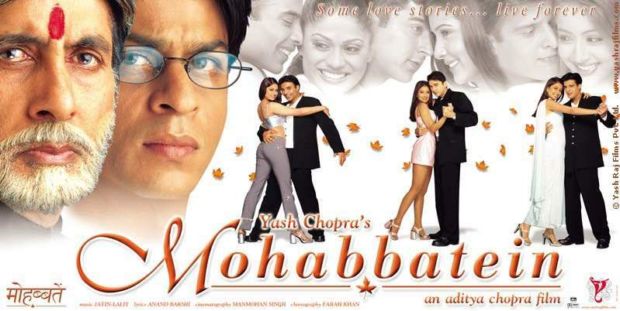 When filmmaker Aditya Chopra decided to call the shots once again after the earth-shattering success of his directorial debut ‘Dilwale Dulhaniya Le Jayenge’ (1995), a cinematic masterpiece ‘Mohabbatein’ came into existence. Released in 2000, the film reinstated the fact that Aditya had all the potential to take his father Yash Chopra’s legacy forward as his second outing as a director turned out to be one of the most successful movies of that year. Toplined by the two biggest megastars of the Indian cinema – Amitabh Bachchan and Shah Rukh Khan – along with a host of newcomers like Jimmy Shergill, Jugal Hansraj, Uday Chopra, Shamita Shetty, Kim Sharma and Preeti Jhangiani, the film shattered several box-office records at the ticket window. Also featuring former Miss World Aishwarya Rai in an extended cameo, ‘Mohabbatein’ enjoyed an excellent run of almost a year at the domestic box-office.

The story of a strict disciplinarian principal of Gurukul, Narayan Shankar (Amitabh Bachchan) and his clashing ideologies with the violin teacher Raj Aryan (Shah Rukh Khan), who joins his campus to teach students a lesson or two about love and romance, touched the right chord with the audience, especially the youngsters. Apart from the story and sterling performances, what worked in the favor of the film was its chartbusting music which was composed by brothers Jatin-Lalit with lyrics penned by Anand Bakshi, the same team who worked for ‘Dilwale Dulhaniya Le Jayenge’.

Made on a moderate budget of Rs. 19 crore, the film ran for 50 weeks consecutively and went on to pull in Rs. 70.62 crores from the domestic market. It created waves in international markets also and raked in Rs. 19.39 crores from there, taking its worldwide total to humongous Rs. 90.01 crores.

TRIVIA: The set of the school campus ‘Gurukul’, where majority of the film was shot, was erected in London, England.