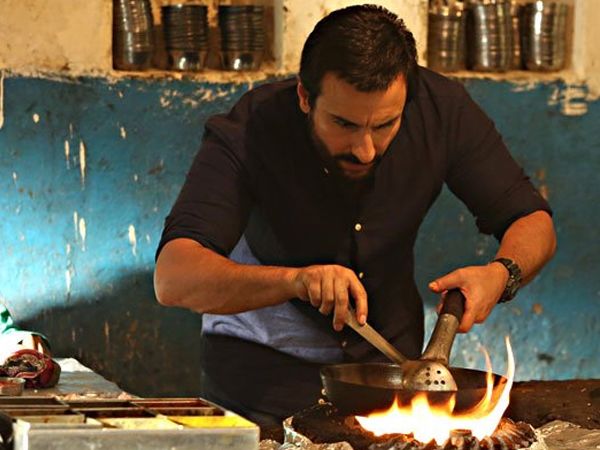 Just when we were getting to hear awesome stories of this movie, we now have the first poster of it out already! It shows a wonderful quirky bond between Saif and Svar, who play father-son in the film. By the looks of the poster, it already seems like a light-hearted fun movie.

The film is going to be produced by Bhushan Kumar’s T-Series and Abundantia Entertainment, led by Vikram Malhotra. Vikram had earlier said, “Chef is the true new age feel-good, family film. We wanted the film to release in a period where families can step out to enjoy this epic film with each other.”

Abundantia shared the quirky poster on Twitter and wrote, “Presenting the first look of @ChefFilmIndia – A story of food, love, family and togetherness. #ChefTrailer out at 2pm today! #SaifAliKhan”

Presenting the first look of @ChefFilmIndia – A story of food, love, family and togetherness. #ChefTrailer out at 2pm today! #SaifAliKhan pic.twitter.com/oidf0vYRcg

Speaking about jointly producing the film, Bhushan Kumar said, “We’ve had a successful collaboration with Raja and Vikram on Airlift and we’re proud to now share this heartwarming film with the esteemed audience.”

After which the director expressed, “It’s been an amazing journey adapting Chef. We’ve had great fun making the film. It’s truly a fun family journey and therefore we want to release the film at a suitable time when the entire family can go out and watch it. To that end, I think we’ve found the right release window.”

Saif Ali Khan too spoke about his excitement and said, “I’m truly excited about Chef, I’ve enjoyed every bit of moment shooting for it. Raja has adapted the story beautifully for the Indian palate, underlining a relationship between a father and son. A film with such a universal appeal deserves the right release date. We, as a team, are doing our best.”