Ajay Devgn will now be portraying the role of the unsung warrior of glorious Indian history Subedar Taanaji Malusare, who fought alongside Chatrapathi Shivaji Maharaj.

The ‘Shivaay’ star took to Twitter to announce his upcoming film, ‘Taanaji – The Unsung Warrior’ and even posted the first look poster of his movie.

He entitled the post, “He fought for his People, his Soil & his King Chhatrapati Shivaji. The unsung warrior of glorious Indian history, Subedar Taanaji Malusare.” 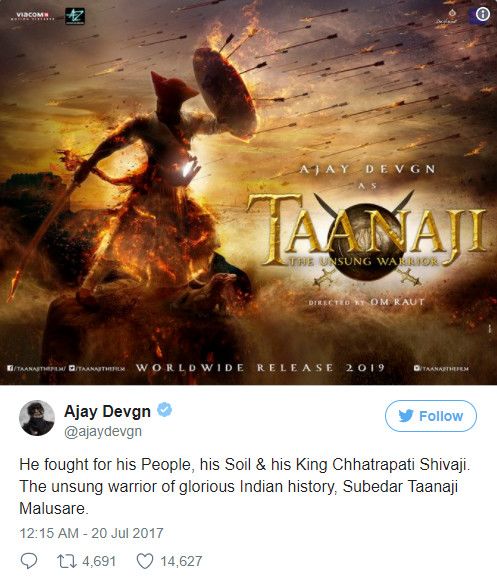 Ajay revealed in the previous tweet that he has been working on this for quiet a long time.

The ‘Drishyam’ star is presently waiting for the release of the Milan Luthria-directorial ‘Baadshaho’ which is slated to release on September 1.

Apart from this, he will also be doing Rohit Shetty’s ‘Golmaal Again’.