After wrapping up the London schedule of ‘Judwaa 2’, director David Dhawan has begun shooting for his upcoming film in Mumbai. 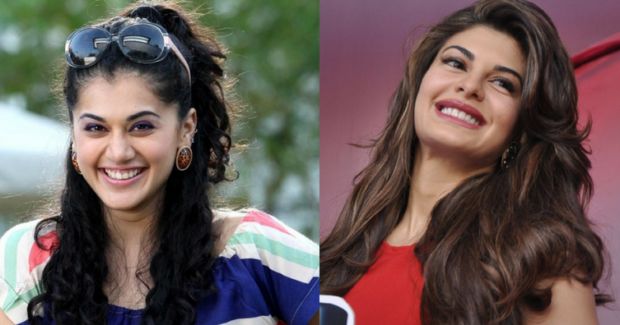 Rumours of a split between the female leads Jacqueline Fernandez and Taapsee Pannu were making the rounds as they were shooting in London. Putting all the rumours to the rest both the leading ladies of the film having a great time on the set.

In an Instagram video uploaded by Taapsee Pannu recently, she is seen teaching Punjabi to Jacqueline Fernandez . The “Kick” star tries her level best to get all the words right but only ends up sounding funny.

On public demand that’s her entry in our punjabi gang on #Judwaa2 sets! A very sporty student I must say! @jacquelinef143

Taapsee and Jacqueline are currently shooting for “Judwaa 2″ with Varun Dhawan in Mumbai. This trio dancing madly on the 90s hit numbers Uchi hai building and Tan tana tan.

The sequel of Salman Khan starrer 1997 “Judwaa” will feature Varun Dhawan playing the dual characters of Raja and Prem along side Jacqueline Fernandez and Taapsee Pannu.

Produced by Sajid Nadiadwala and directed by David Dhawan, “Judwaa 2” is presented by Fox Star Studios and Nadiadwala Grandson Entertainment.

“Judwaa 2” is slated to release on September 29.