The first poster of “Mubarakan”, starring Anil Kapoor and his nephew and actor Arjun Kapoor, will be released on popular cricket-based talk show “Extraaa Innings T20” on the finale of the Indian Premier League (IPL) on May 21. 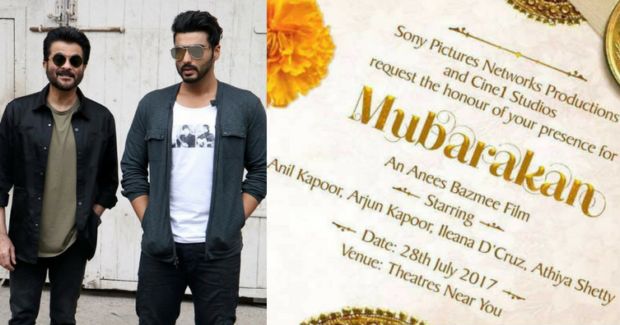 Anil Kapoor, known for his evergreen roles like Lakhan and Mr.India, is geared up to share screen space with nephew Arjun Kapoor for a film where the two will play ‘chacha-bhatija ‘ in reel life too.

The forthcoming film’s director Anees Bazmee said in a statement: “For me, the first look of my film is very important as it sets an expectation and eagerness to know more about the film.”

“Cricket and movies are loved all over India and no other day is better day than the IPL finale to show all the viewers worldwide the first look Mubarakan.”

While Arjun will be portraying a double roles of Karanveer and Charanveer, Anil will wear a turban to play a Sikh character named Kartar Singh in the movie.

With Athiya Shetty and Ileana D’Cruz as the leading ladies, ‘Mubarakan‘ is a comedy hilarious film revolving around a big fat Indian wedding. The film will also stars Neha Sharma, Karan Kundra, Ratna Pathak Shah and others.

The film “Mubarakan” directed by Anees Bazmee is scheduled to have its worldwide release on 28th July 2017.