Daas Dev is a film about power as it gets in the way of love. Sudhir Mishra in his Daas Dev tells us a reverse tale of Sarat Chandra Chatterjee’s DevDas where his Dev ultimately breaks free from his addictions and dynastic ambitions of his family, Paro does not stay trapped behind a big gate inside her husbands house and as for Chandni- is she a money handler, fixer, manipulator or simply a girl in love?
In today’s world, will our characters be able to come together and ditch the Daas? 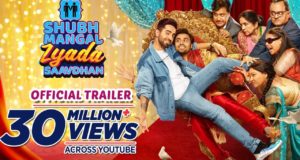