Clash Between Aamir Khan’s ‘Secret Superstar’ And Rajnikanth’s ‘2.0’ On Diwali 2017!

Aamir Khan upcoming movie ”Secret Superstar” will clash with Rajnikanth’s and Akshay Kumar Starrer ”2.0” at the Cineplexes this Diwali . Sources even told that the makers of Secret Superstar, with two big releases (Toilet : Ek Prem Katha and tentatively titled The Ring) on August 11, were left with no choice but to look for another date. 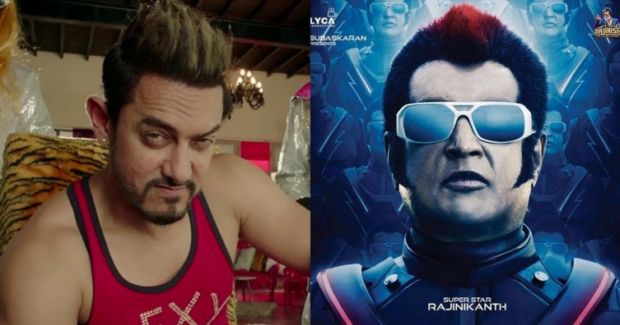 A proponent of Secret Superstar told in a statement : ” The second week of the film is as important as the first week. Auspiciously, the Diwali festive season is known to have big space for multiple big banner films”.

Some sources even told that Aamir Khan himself called Rajinikanth and discussed his concerns with the film releasing as per the earliest August Schedule. ” Both the actors share a warm bond and it was with Rajini sir’s well wishes that the film is announcing its release on Diwali”.

Superstar Rajnikanth did his level best and has spent ample amount of money to make 2.0 one of the biggest film in the country. Secret Superstar , on the contrary has Aamir playing a pivotal special appearance. Not only this, the movie also has ”Zaira Wasim” in the lead role and movie is directed by Aamir’s manager and promoter Advait Chandan. Aamir khan and his wife Kiran Rao are the producers of the movie. Although Secret Superstar is of different style and a different storyline, trade analysts will still work for it. courtesy Aamir. This is considered as the biggest clash of the year, unless the makers of ”Golmaal Again” makes an Official announcement as to if they will be releasing the movie at the time of Diwali.