The most-awaited winners’ list of the 64th National Film Awards was released on Friday Morning. Sonam Kapoor-starrer ”Neerja”, which was directed by Ram Madhvani, was announced as the Best Hindi Feature Film. Superstar Akshay Kumar received the Best Actor Award for his acting in ”Rustom”.

Sonam Kapoor also got a Special Applause for her performance in ”Neerja”.

Obviously, both Sonam and Akshay are extremely overwhelmed with their success, win and fame.

Concomitantly, both of them are buzy shooting in Maheshwar for their upcoming film, ”Padman”. Sonam took to Instagram and posted a pic with Akshay, and we extremely liked the shocking expression on the winner’s face. Don’t you too? Check this out: 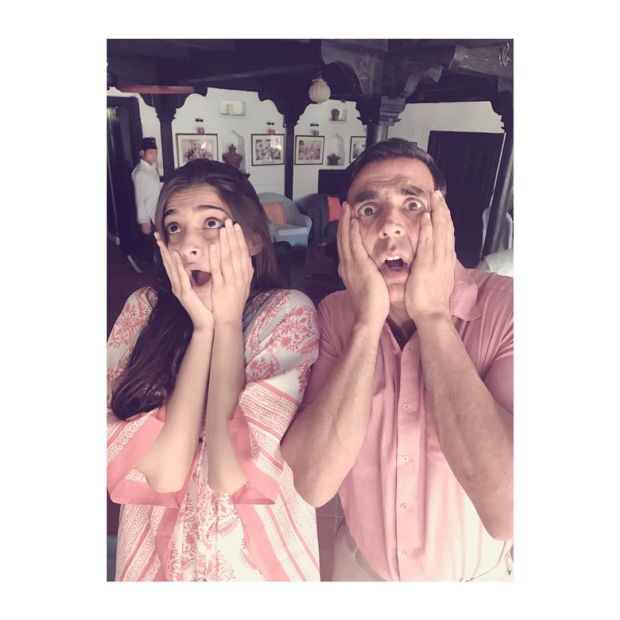 Akshay also twitted and posted a video thanking the jury of 64th National Film Awards and his fans for their commendable support throughout this journey.
Check out the full video here:

Over 300 films nominated for the honours this year. The process to pick the best from Indian Cinema began in mid- March. Famous Filmmaker Priyadarshan was the chairperson of the jury in feature films catergory, while nationally applauded cinematographer and writer Raju Misra was the chairperson in non-feature catergory.

Akshay Kumar was last seen in a special appearance role in a recent release ” Naam Shabana ” and has two upcoming film in his basket – Toilet : Ek Prem Katha with upcoming actress Bhumi pednekar, and the big budget ”2.0” with superstar Rajnikanth. He is also shooting for ” Padman”, produced by his wife Twinkle Khanna and co-starring Sonam Kapoor.