Salman Khan Reveals The Reason For His Being Single In “Big Boss 11” First Promo!

And finally after a wait of months, the first promo of Bigg Boss 11 is released. The 11th season returns with Salman Khan as the most charming host.

The show will be telecasted two weeks earlier this year on October 1. The makers of Bigg Boss have now come up with the first promo of the controversial reality series. 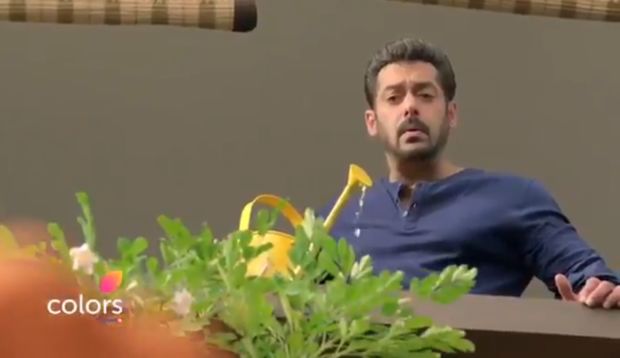 The first promo of the upcoming season was just shared by Colors’ CEO, Raj Nayak, on his Twitter handle. The promo is much more than we asked for, really.

Like every first promo, announcing a new season, this one, too, is quirky and colourful. So far we have seen Salman in an astronaut suit, a pilot’s uniform, dressed as an angel and devil for various promos of earlier seasons, but this time he is looking simple and minimalistic.

The teaser takes us back to Salman from Mujhse Shaadi Karoge days. It shows him watering his plants in the balcony. As he sings and waters his plants, some of it from falls into his neighbour’s cup of tea on the ground floor. Salman happily sings: Gamle mein paani doh, gamla naa joh sukhao. Gamla joh sukh gaya toh, plant marr jaayega…

Check out the teaser here:

The theme, as Salman hints, will be the neighbors this time. There will be small and big fights between ‘padosis’ in the Bigg Boss 11 house. Well, the most interesting thing is, in this video, Salman Khan is seen actually talking about his marriage.

As we told you earlier, this time there will be two houses. Celebrities and Commoners will be neighbors and will have a damm difficult time in surviving in the main house.