SuperStar Priyanka Chopra’s next Bollywood film has been an enigma for quite sometime now. The actress, who was in the USA for almost 8 months, returned to Mumbai last week. After her last starcast in Bollywood with “Jai Gangaajal”, Priyanka was focusing on her popular American show “Quantico” and her Hollywood debut film “Baywatch”. 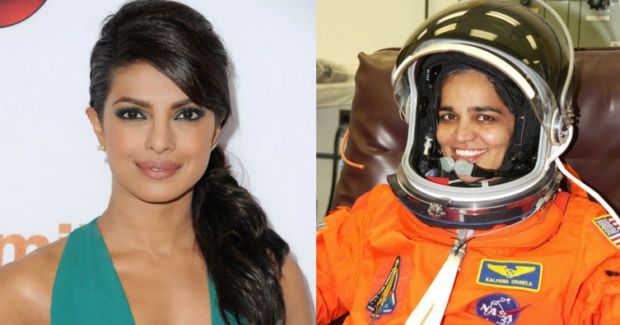 As per reports, the actress will now play the role of astronaut Kalpana Chawla in a biopic directed by a newcomer, Priya Mishra. The biopic was announced by Viacom 18 last year, but the cast was not finalised then.

Debut Director Priya Mishra confirmed the news to a leading tabloid saying, “I have been working on it for the past seven years. A new production banner will back the project. I was last heading a TV channel creatively and post 2011, quit to pursue filmmaking. This is one of the two scripts that I have written myself.”

Priya is a true workaholic and has also met Kalpana’s parents several times as part of her research for the film.

Kaplana Chawla- the historic lady, was the first Indian woman astronaut in space. She first flew on Space Shuttle Columbia in 1997 as a mission specialist and primary robotic arm operator. In 2003, Chawla was one of the seven crew members who died in the Space Shuttle Columbia disaster. She spent 31 days, 14 hours and 54 minutes in space.

Meanwhile, Priyanka is back in India from US after shooting for the second season of her hit television show ‘Quantico‘ successfully. She is currently in the city to promote her Hollywood debut film ‘Baywatch’.