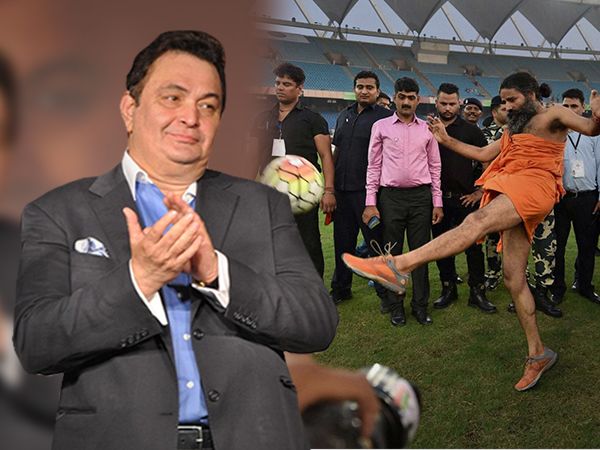 Rishi Kapoor is one of those actors who uses social media to the fullest. The veteran star has a comment on everything and most of the time he has a sarcastic opinion to make. None the less, we just love how casually Rishiji speaks his mind with sometimes leaving us in splits with his nasty jokes.

So recently, we were delighted to see our very own fitness guru Baba Ramdev playing football with Bollywood stars and members of Parliament at ‘Football ka Mahamukabla’ held in Delhi. Pictures of this made it to the internet and people did go mad trolling Baba Ramdev’s football skills. Even Rishi Kapoor had a comment to make and as expected it’s super funny.

At first, he urged his son Ranbir Kapoor to get Baba Ramdev on board his ‘Mumbai City FC’ team. He tweeted,

Later, he commented on a picture of Baba Ramdev dancing with the cheerleaders and it’s downright hilarious.

Rishi Kapoor and his sense of humour is unbelievable!