Ace superstar Vinod Khanna was recently hospitalized in HN Reliance Foundation and Research Centre in Girgaum on friday night. He has been admitted due to ”severe dehydration”. 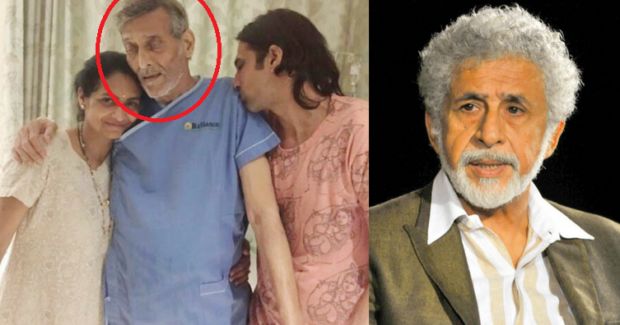 Few days ago, pictures of the 70-year-old actor gone viral where he was seen in the hospital uniform along with his wife and son. In a recent picture, in which the actor is seen terribly weak, has been doing the rounds on social media.

After seeing this viral pic, not only his fans but various bollywood celebrities also showed their sympathy and regards for the actor.

Famous actor, Naseeruddin shah, who costarred with Vinod Khanna in the movie ”Rihaee” was recently asked about how he felt about Vinod’s Khanna health condition mainly about the viral pic.

Shah who was present at the book launch party of film archivist P.K. Nair gives a weird reaction. He disdainfully said, ” Relevant questions only” and simply moved away.

Shah’s reaction can be considered to the fact that there has been no official confirmation by Vinod Khanna’s family.

The book launch was organized by the Film Heritage Foundation, the Country’s only non-government film archive.