Kareena Kapoor Khan and Saif Ali Khan are one of the trendy couples of B-town. However, at the time they got married, the couple decided to stay away from kissing on screen. As per the clause, both Saif and Kareena would refrain from kissing their co-stars in any movie. 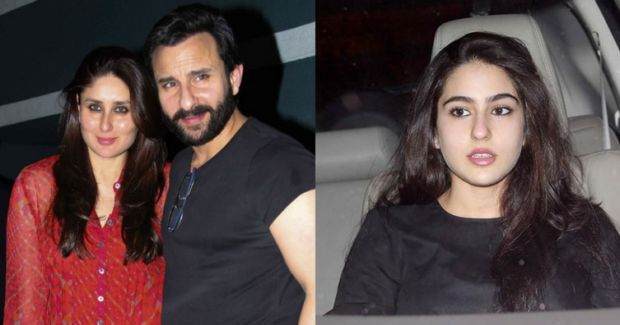 However, except last year, it was a quite different story – Kareena locked lips with Arjun Kapoor in ‘Ki & Ka’. Earlier this year, Saif too was seen sharing an on-screen kiss with Kangana Ranaut in ‘Rangoon’.

So what made the couple change their firm thought? According to a report in Filmfare, it was none other than (Saif and ex-wife Amrita Singh’s daughter ) Sara Ali Khan who made the two drop no-kissing clause from their contracts.

On a recent talk show, Kareena disclosed that it was Saif’s daughter Sara Ali Khan suggested that they should not have any objection about kissing their co-stars on screen. Apparently, the youngster advised them that considering the kind of films and characters that are being written in Bollywood, Saif and Kareena should treat a kissing scene just like any other scene.

On the professional front, Sara is gossiped to be making her Bollywood debut with Dharma Productions. Kareena will soon begin the shooting of ‘Veerey Di Wedding’ while Saif has projects such as ‘Chef’ and ‘Bazaar’ in his bag.