Sonam Kapoor is famous for her iconic style statement and she loves trying new things with her wardrobe. She is currently at Cannes 2017 and her first two looks of the day are out and we are astonished what has happened to the diva’s fashion game? 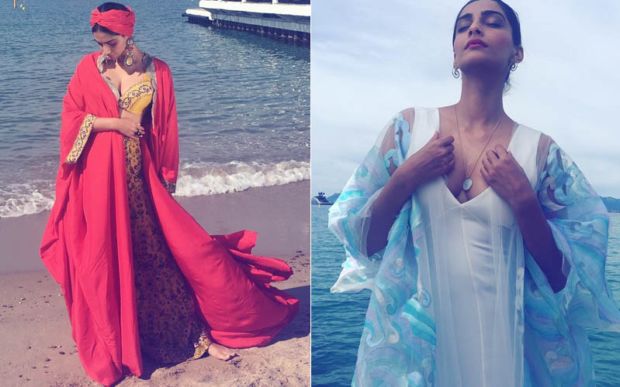 Today is the last day of the ongoing Cannes Film Festival 2017. Sonam Kapoor will be gracing the red carpet tonight but while her fans await that, the fashionista is already out on the beach, showing her first 2 looks of the day. Well, I am not impressed by either.

In her first look, Sonam is seen posing by the sea side in an Anamika Khanna creation. It’s a crop top with palazzo and a loose cape over it and a matching head gear. Although the colours are suiting Sonam’s skin tone, yet the concept is done to death. If #throwbackglam (as mentioned by Rhea Kapoor) is what Sonam wanted to relive, then I think it was not a good choice of outfit.