Major Comeback : Upasana Singh Aka Bua Is Back In “The Kapil Sharma Show”

Good News for all the fans of the Highly Popular Show -” The Kapil Sharma Show” as one of its important member who has been missing from the show since long ago is back in the show. 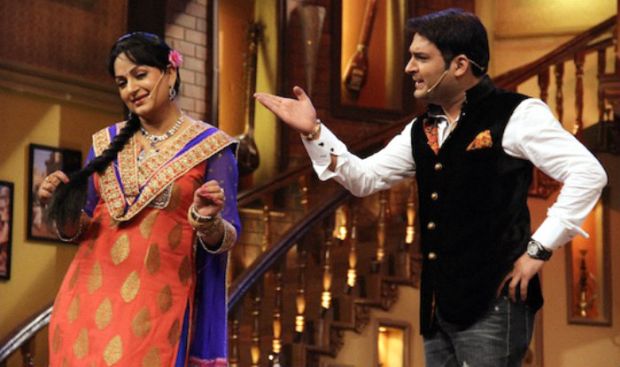 Yeah Its True!
Well-Known actress Upasana Singh who did the famous character of Bua in the show is back with Kapil Sharma and his team.

Assuring the news exclusively to Zoom, Upasana said, “yes,it’s very much true. In fact, I was shooting with Kapil last night. You’ll see me coming back in a very different character and I hope the audience is going to like it. People have been asking me from quite a while about my comeback on Kapil’s show, so I’m happy to inform them that finally I’m coming back.”

While detailing her character, Upasana Singh further added, “Honestly, I cannot reveal much about the character because we want to keep it as a surprise for our audience. But yes, all I can say is that here is no Bua coming back to the show. In fact, viewers will get a chance to see me with a husband and a lover too (laughs). I can assure you that people will have a great laughter riot after watching our act.”

Upasana further affirms that popular comedian Paresh Ganatra, who was also a part of Kapil’s team in Colors’ show ‘Comedy Nights With Kapil’ will be seen playing her husband and one more comedy artist will play her boyfriend’s role . It’s going to be full of fun seeing her bungling up with her husband and boyfriend.

The actress is returning back after long time of her separation with husband as she was going through a tough time but the lady is back to entertain again! Infact, She is also co-hosting the recently launched ‘Nach Baliye 8’ on StarPlus.