“Bareilly Ki Barfi” trailer gave us a sneak-peek into the characters of lead actors Kriti Sanon, Ayushmann Khurrana and Rajkummar Rao. Now, the makers have unveiled the first song ‘Sweety Tera Drama’, and we must say it is a perfect wedding track of the season.

It has all the Bollywood masti elements, and the much needed dose of ‘desi thumka’ from all three actors, but of course, our favorite is Kriti whose moves make you relate to her character.

Composed by Tanishk Bagchi, written by Shabbir Ahmed and crooned by Dev Negi, Pawni Pandey and Shraddha Pandit, the song has a distinct flavor of a desi wedding number, which has got the Bollywood tadka.

The colourful and loud music of ‘Sweety Tera Drama’ will remind you Katrina Kaif’s “Kaala Chashma” or Alia Bhatt and Varun Dhawan’s Badri Ki Dulhania from their recent release “Badrinath Ki Dulhania”. In Sweety Tera Drama, Pritam and Chirag appears to be celebrating the 50th anniversary of Bitti’s parents. 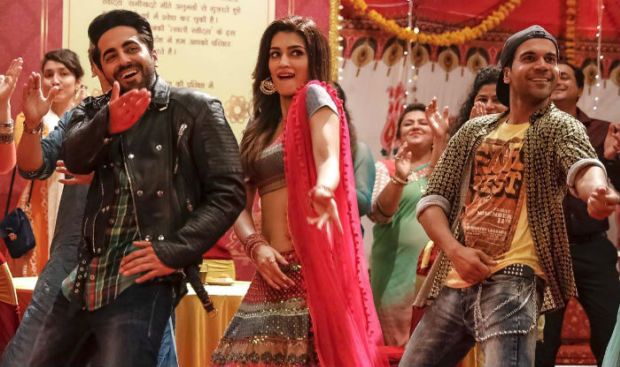 Directed by Ashwini Iyer Tiwari, “Bareilly Ki Barfi” is an amazing story that revolves around the characters of the three actors. The film is scheduled to hit the theater on August 18.