The Hollywood superstar India visit was kept under hidden and it was an amazing surprise to finally see him with none other than Bollywood Superstar on the same stage.

Brad Pitt, who is currently in Mumbai for the promotion of his upcoming film ‘War Machine,’ spent quality time with Shah Rukh Khan. 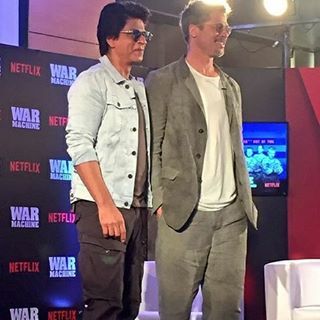 The King Khan posted a pic on his Twitter page posing with the 53-year-old American actor.

He entitled it as, “My best 2 David & Brad for the release of War Machine on @netflix Pleasure to meet u both & Brad the dance remains.”