Salman Khan Playful Fight With Nephew Ahil Sharma Is A Must Watch Video!

Whenever we come across a picture or a video of baby Ahil Sharma, it just gives a cute smile on our face instantly. The ‘Khan’daan never fails to share any cute and candid pictures of the cutie pie on their social media pages. 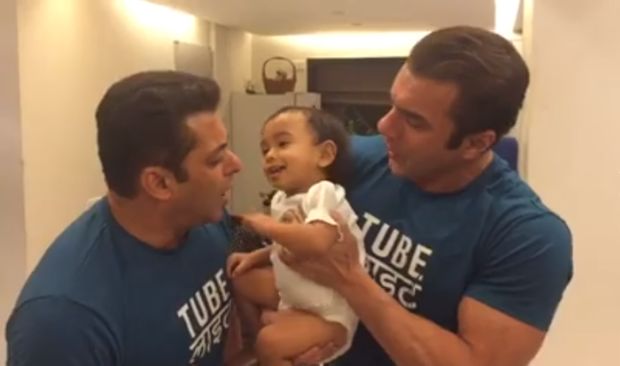 The cute little munchkin is Salman’s favorite and we have seen Sallu’s unmeasurable love for him, time and again, through various pictures and videos.

Remember when Sultan was released, Salman Khan made a cute video with his nephew Ahil. It rock the internet.

Now, Salman shared another video where he is seen happily fighting with Ahil. In the video, we can see Sohail Khan holding Ahil lovingly in his arms while Salman plays and “fights” with his little toddler. The 51-year-old actor sings the title track of Sultan while playfully fighting with Ahil.

Check out the adorable video here:

Looks like that Ahil has grabbed all his action and punches from Salman Khan.

On the professional front, Salman will be seen in Kabir Khan’s Tubelight, which is scheduled for an Eid release. After that, he will be seen with Katrina Kaif in Ali Abbas Zafar’s Tiger Zinda Hai.