Comedian Sudesh Lehri Is SUPER FUNNY In The New Promo Of “The Drama Company”!

Comedians Krushna Abhishek, Sudesh Lehri along with the former team of The Kapil Sharma Show – Sugandha Mishra, Dr. Sanket Bhosale and Ali Asgar gathered together for their new show ‘The Drama Company’. 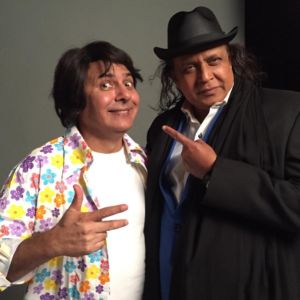 The cast has started shooting for the show and people are desperately waiting to watch all of them together again.

Sony TV released the first promo of the show a while back and it was too funny!

And now, the new promo shows Sudesh Lehri as the producer and he is at his comic best.

In the promo, Sudesh is talking about how smart he is and how rich he is now that he has become the producer of the show.

The upcoming comedy show will also be telecasted on Sony TV. be a rival of Kapil Sharma’s “The Kapil Sharma Show” and will air on the same channel. It is going to be a comic jung on Sony TV with the channel launching “The Drama Comedy”. It will replace “Sabse Bada Kalakaar” from July 15.

Sunil Grover is supposed to be a guest artiste on the show. “The Drama Company” is produced by Preeti Simoes in association with Frames Entertainment. It is not a big and out comedy show but more on the lines of “Comedy Nights Bachao”.

Bollywood ace actor Mithun Chakraborty, who has also judged various reality shows, is also a part of “The Drama Company”.