We all know that Virat Kohli is currently in Sri Lanka to play the ODI series. The handsome cricketer who is quite active on social media keeps posting amazing pictures with his ladylove Anushka Sharma from quite some time now. 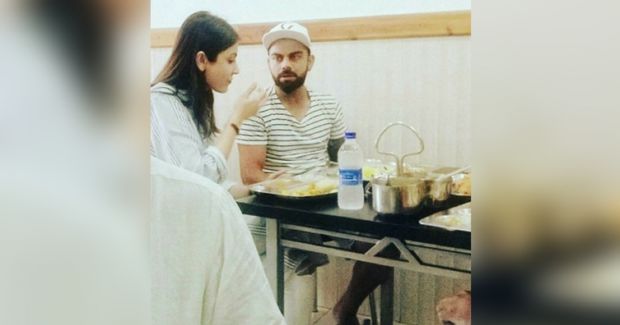 Recently, a cute picture of Virat and Anushka enjoying a thali is going viral, and the social media buffs just can’t contain their excitement seeing it.

The picture is beautifully captioned as “Love BITES,!”

In a picture that has surfaced on social media, the ‘Jab Harry Met Sejal’ actress and the Indian skipper were seen spending some quality time together. The two were seen eating out together having a great time.

The couple may not have officially announced their relationship status but they are giving us some serious love relationship goals.

On the work front, Anushka is busy with Pari, her third production film, The Dwarf film with Shah Rukh Khan and Sui Dhaaga with Varun Dhawan.