Salman Khan starrer “Tubelight” trailer got release today – 25th May. Ever since we saw the teaser of the film, there has been a lot of headlines surrounding the film. First song “Radio Song” from the film has also been released and now the much-awaited trailer is OUT.

The makers have shared a new poster of the film. On this brand new poster, we see an emotional yet upset Salman Khan in close up where as Sohail Khan is seen in as a soldier in backdrop on the side. 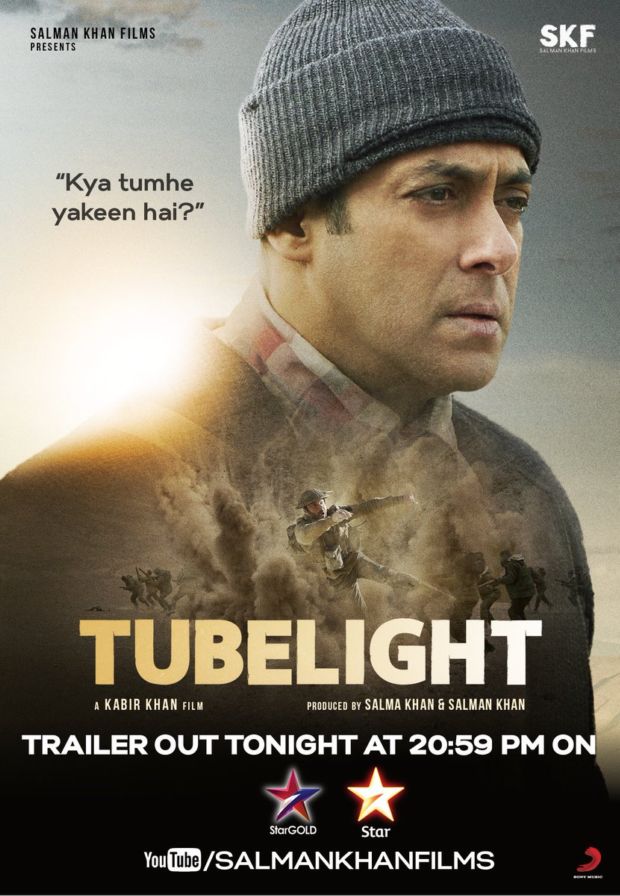 Salman and Sohail are sharing the screen space after seven years. They last co-starred in Veer. In the pictures of “Tubelight”, directed by Kabir Khan, Sohail is seen as a young soldier on the warfront. The stills depict a tensed war-like situation.

Kabir and Salman’s last film “Bajrangi Bhaijaan” shattered many records and the same is expected from “Tubelight” too.

Set against the backdrop of 1962 Indo-China war, Tubelight tells the story of a simple guy played by Salman whose brother (Sohail Khan) gets lost across the border during war. The whole story revolves around how Salman’s character crosses the border and battles all odds to rescue his brother.

Tubelight is a grand reunion of Top B- Town superstar as he comes back not only with his brother and Kabir, but also re-teams up with Shah Rukh Khan after 15 years. Shah Rukh will be seen in a cameo in the movie. The two actors last co-starred in 2002 romantic drama, “Hum Tumhare Hain Sanam”. Five years later, Shah Rukh’s “Om Shanti Om” saw Salman making an appearance but just in a song, which features various Bollywood actors.

Written and directed by Kabir Khan The film is the big Eid release of the year that hits cineplexes on June 23, 2017.