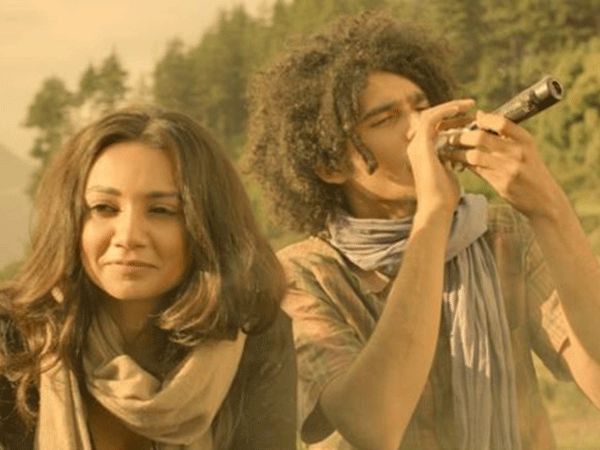 “How does it feel to be a revolutionary? The war rages on.”

‘M Cream’ is a story of four friends who head for a road trip together to find ‘M Cream‘, an exquisite class of hash, and it turns out to be a journey of self-discovery. Figs (Imaad Shah), a young guy who is addicted to hash and likes to live his own world of imagination, comes across Jay (Ira Dubey), a just-out-of-college woman who is extremely opinionated, idealistic and believes that good causes and good intentions can bring positive changes in a much messed-up society. How Jay discovers the thoughtful and idealistic approach in a person who apparently does not care about the rest of the world and how love strikes between two minds with so many differences, is a beautiful story. During the trip, there is friendship made and there is friendship broken. There is love formed and there is love lost. There is a journey which changes its direction and there are two human beings who reach a destination; it is unplanned but worth.

But, there’s more to it than just romance, friends, fun and road trip. In a long time, ‘M Cream’ is one film which shows the honesty to accept and portray many things we unofficially name ‘unwanted’ and tend to overlook or suppress. It emphasises on those young minds who try, experiment, break the comfort zone. Many would argue that it has kind of glorified the consumption of marijuana. No, it has not. It simply aims to end the hypocrisy, where we are well aware of its consumption but still manage to avoid discussions and mentions of it very comfortably.

It is also a story where Figs never took the empathetic soul inside him seriously, but rediscovers himself. It is a story which portrays love in a flamboyant manner; so much that you can see it coming.

For Agneya, this is his first feature film. But from the depiction of characters, it does not look like so. The film carries in itself a set of principles that do not force themselves upon you but instead, forces you to re-think and question what you believed earlier. Imaad and Ira are apt in their performances. The film has been extensively shot in the Himalayas and is a treat to your eyes. Bonus? Music by Shubha Mudgal.

There are a few instances where we felt the story could move faster and a few ends seemed little abrupt. But you can excuse them, keeping the rest of the film in mind.

‘M Cream’ is certainly not a film everyone will enjoy. Do not expect it to be inspired by ‘live life king size’ principle. It talks about the life that flows underneath; that comes with many pleasant and many unpleasant feelings too.

For the ones not fond of forced entertainment and admiring subtle expressions, go and watch!