While Dwayne Johnson and Zac Efron-starrer Baywatch is getting all the negative reviews, critics say that it’s Priyanka Chopra who outshines great than anyone else in the film. Good Work girl! 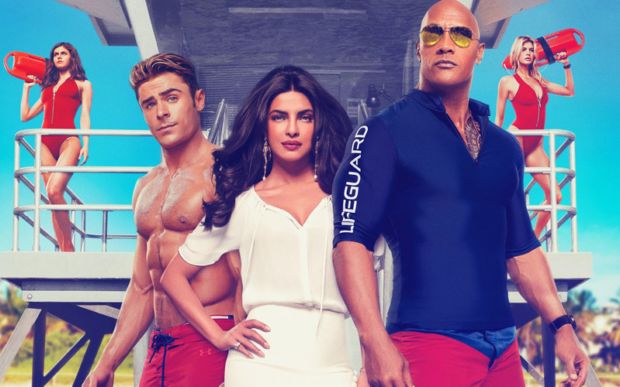 Priyanka Chopra has given phenominal performance! Her Hollywood venture, Baywatch opened for critic screenings recently and unfortunately the film has received quite average reviews. While a lot of reviewers have dismissed the film, it’s our desi girl who has come out shining amongst the entire starcast of the film.

Here are a few actual reviews from leading Hollywood publications:

Guardian says, “The swimwear couture hasn’t moved on since the 90s, either: cut so high at the hip you wonder if there was a lycra shortage; unzipped at the front to show maximum cleavage. Even Bollywood star Priyanka Chopra, the underused villain of the piece, looks like she was contractually obliged to show as much flesh as permissible.”

Forbes Magazine says, “Chopra has fun as the baddie, but she stays in the background until the end of the movie and really only gets one big scene at the end of the picture. The showdown is the best moment in the film, one which cleverly plays on gender-specific action movie tropes while showing its female villain no gender-based charity. I wish more movies had female super villains and to its credit, Baywatch doesn’t treat it as a big deal.”

The Wrap explains, “And if the talented Chopra also has comic chops, they remain untapped here; she’s playing a character who describes herself as aspiring to being a 007 villain, but the actress finds no fun in Victoria’s wickedness.”

IGN says, “The only other highlight is Priyanka Chopra as nefarious entrepreneur Victoria Leeds, who outshines pretty much anyone she’s in a scene with. Chopra’s engaging and interesting and is the only character that speaks with any kind of distinctive cadence, with the rest of the cast falling into the exact same pattern of delivery of their hackneyed gags. None of them are given much of anything to do, either.”

Collider described Priyanka Chopra as the real standout in Baywatch. “I’ve never seen her TV series Quantico, but she owns the film every second she’s on screen. Victoria isn’t a particularly memorable villain on the page, but Chopra is commanding, and when she gets called an aspiring Bond villain, it made me want her to be the villain in the next Bond movie. If there’s one good thing that can come from the wreckage of this movie, it’s for Chopra’s career in Hollywood films to take off.”

Elle Magazine review it as, “Priyanka Chopra, though, as real-estate titan villainness Victoria Leeds, makes everything around her look like a really, really nice car commercial.”

Variety reviews it as, “Mitch has found packets of drugs on the beach; one missing city official and mysterious blazing yacht fire later, it’s clear that there’s a larger criminal scheme in play. Gee, could it have something to do with Victoria Leeds (Priyanka Chopra), the new owner of the Honda Club? Chopra, the crossover Bollywood star, preens and schemes like a vamp from “Dynasty,” and the whole drugs-and-real-estate plot has a musty air of sub-“Miami Vice” intrigue — it’s closer to “Starsky and Hutch.”

Independent reviewed it as, “Of course, there’s something else afoot as Priyanka Chopra’s villain is using a local business to smuggle drugs onto the beach. Despite being incredibly talented, Chopra is clinically underused, the script offering her nothing to work with.”

Hollywood Reporter said, “The plot, such as it is, concerns the Baywatch team springing into action to counter a wave of drugs sweeping the area, masterminded by resort owner/villainess Victoria Leeds (Priyanka Chopra, Quantico). That the lifeguards are not actually responsible for law enforcement, as they’re periodically reminded by an aggravated local cop (Yahya Abdul-Mateen II of The Get Down) proves little deterrent to their enthusiasm for crime-solving.”

Telegraph says, “The plot, about an Indian gangster queen (Priyanka Chopra) importing drugs along the coast, is wafer-thin and perfunctory at best. And yet, somehow, Gordon stretches the movie’s running time to two hours, beefing it up with a fatuous romantic subplot and not one, but two heinously long-winded penile gags ripped straight from the Farrelly brothers’ textbook of gross-out comedy. The women, meanwhile, are there purely to up the film’s phwoar factor: Kelly Rohrbach as CJ Parker and Alexandra Daddario as Summer Quinn wink and nudge but still say – and wear – very little.”

So, while the Baywatch fans might be damm disappointed, Priyanka Chopra and her fans surely have no reason to be sad, as the hottie has pretty much done her job of getting noticed in the multi-starrer drama.