The death of veteran actress Reema Lagoo early on Thursday morning left Bollywood and her numerous fans shocked. The veteran actress passed away at the age of 59 after reportedly suffering from cardiac arrest. After the actress complained of chest pain on Wednesday night, she was took to Kokilaben Dhirubhai Ambani hospital in Andheri, Mumbai where she took her last breath. 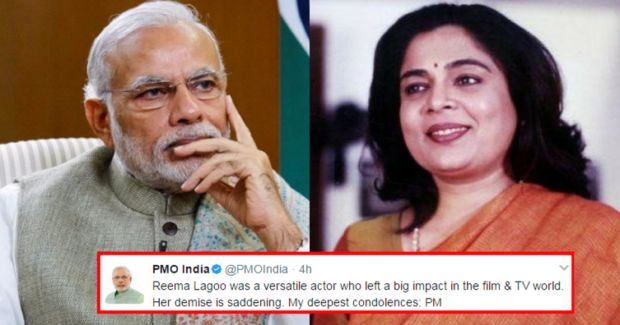 Expressing his sorrow over the sudden demise of actress Reema Lagoo, Prime Minister Narendra Modi said that she has “left a big impact in the film and TV world.”

The Prime Minister Office’s Twitter handle posted this morning, “Reema Lagoo was a versatile actor who left a big impact in the film & TV world. Her demise is saddening. My deepest condolences: PM”

Reema Lagoo, 59, passed away in the late hours of Thursday at Mumbai’s Kokilaben Hospital, following a cardiac arrest.

The actress was born on February 3 in 1958 and appeared in Marathi and Hindi films, theatres and television shows, serving the industry for nearly four decades.

Currently, Lagoo was working for the daily soap ‘Namkarann,’ where she was portraying the character Dayawanti Mehta.