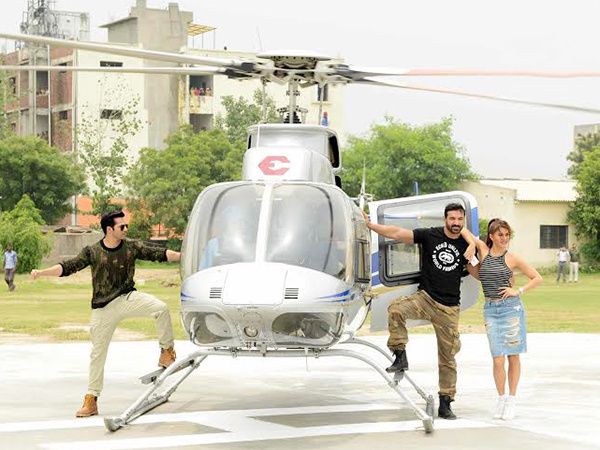 It’s just three days left to witness the action, thrill, and adventure with filmmaker Rohit Dhawan’s ‘Dishoom‘ which is slated to release this Friday. With lots of fun interactions going around, on Monday morning the ‘Dishoom’ team certainly took the level of promotions to another level when buddy cops Kabir and Junaid aka John Abraham and Varun Dhawan made a grand entry at Galgotia University in Greater Noida flying down in a chopper. This was followed by a small match played by Varun and John against the players of Ringing Bells company similarly based on the theme of their movie of finding India’s top batsman who is shown kidnapped in it.

Last but not the least, Varun Dhawan rocked the stage with his dancing on ‘Sau Tarah Ke’ track which was easily heated up further with Jacqueline Fernandez’s presence. Though reportedly John Abraham is under the weather and had also visited the doctor a few days back, being professional he didn’t avoid this promotional event and was keeping up with the enthusiasm of his co-stars.

Check out the pictures from this event here: