Top 10 Iconic Films That Made Rajinikanth The Mega Star

While AirAsia dedicated an entire flight to the Rajinikanth starrer Kabali, the movie’s trailer has already received more than 25 million views on YouTube. The crazy hype surrounding the film that has 65-year-old Tamil mega star Rajinikanth in a salt and pepper, suit donning avatar, playing a gangster, has already reached a feverish pitch. And, as can only happen when the Thalaiva comes on screen, some companies in Chennai and Bengaluru have even declared a holiday on July 22, the day Kabali releases. Made at the cost of Rs. 100 crores, the film is expected to earn Rs. 200 crores within the first three days of release.

With more than four decades in the industry and around 200 films in his kitty, there is no stopping the superstar. While Rajinikanth has had his share of flops (Lingaa, Baba, Kochadaaiyen) many of his films have gone on to be huge grossers, with audience flocking theatres just to catch a glimpse of their hero. We take a look at ten of his most memorable films: 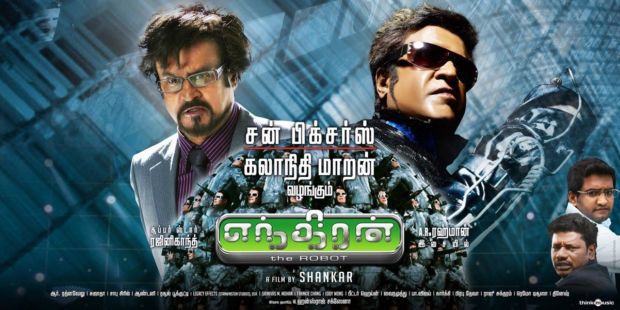 Enthiran: Directed by S Shankar, with Aishwarya Rai as the female lead, the sci-fi movie, Enthiran, had Rajini playing a double role – that of a scientist and an android humanoid. The 2010 Tamil language film was made on a budget of Rs. 132 crores, making it the most expensive film of that time, until