Vidya Balan plays a naughty late night RJ in Tumhari Sulu and the first look has nettled our interest. 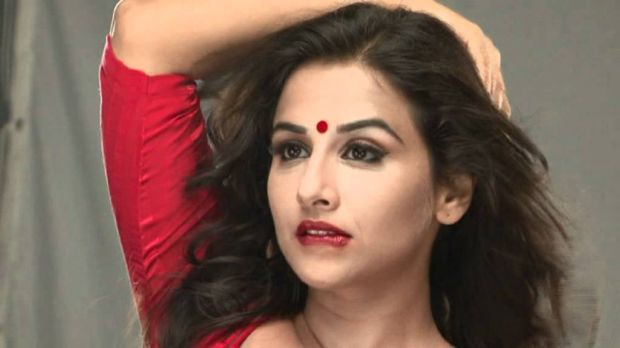 Vidya Balan has left us wanting more with the first teaser poster of Tumhari Sulu. Trade analyst Taran Adarsh revealed the first look of the film on his Twitter account.

In this image Vidya wears a saree and her face is completely covered because she is juggling prizes and a bag full of vegetables. Tumhari Sulu also stars Manav Kaul as Vidya Balan’s husband, Neha Dhupia as Vidya’s Boss, and renowned RJ, Malishka, as Albeli Anjali. The first look of the film is set to release on September 14th.

Vidya had earlier described her character in these words: “Sulu is like that nimbu… you add nimbu for taste or then add it to balance taste; zesty & versatile! I think she’ll unleash my hidden naughty side.”

Vidya Balan plays Sulochana, fondly known as Sulu. Sulu manages to bag herself the job of an RJ who anchors a late-night show, known for its voyeuristic quality and semi-adult shenanigans. Vidya had earlier played a RJ in Rajkumar Hirani’s Lage Raho Munna Bhai with Sanjay Dutt back in 2006.

Tumhari Sulu will be the next big offering from Ellipsis, co-founded by Tanuj and Atul Kasbekar. Last year, Atul had produced Sonam Kapoor starrer Neerja which won hearts of both critics and audiences.