This one line made the entire nation crazy for one film which was a perfect ode to our college life and friendship. Vidhu Vinod Chopra’s 3 idiots will remain to be one of the most memorable films and why not? Each and every actor didn’t just do justice to their roles, they lived the character with so much honesty on the silver screen that we couldn’t help but fall in love with Raju, Rancho and Farhan’s friendship. 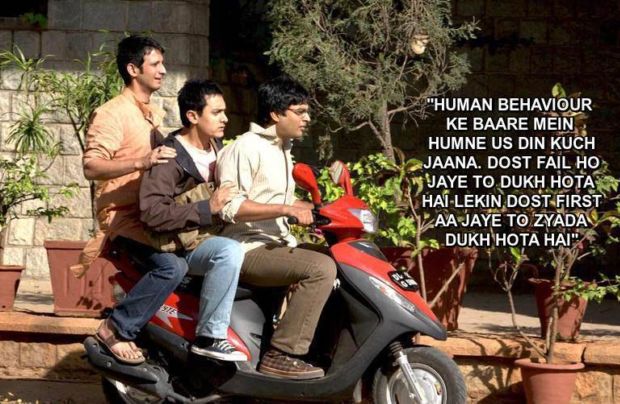 From gate-crashing their Dean’s daughter’s wedding to motivating each other to follow their respective passions, this film had some of the most powerful and thought-provoking scenes.

Even when the film was high on humor, it did manage to strike an emotional chord with the audience because of its message – “Bachcha kabil bano, kabil … kamyabi toh saali jhak maarke peeche bhagegi”!

If you’re a die-hard 3 Idiots fan, here’s a news that will make you super-happy!

According to a recent report, Aamir, Madhavan and Sharman might just come together for the film’s sequel! While there has been no official announcement on the same, we wish the news is true. While we are keeping our fingers crossed for the confirmation, let’s take you on a walk down memory lane! Here are 40 most unforgettable stills from the film that indeed makes it a classic film.

(P.S: We hope you have a DVD of the film because you’d just feel like watching the film ALL OVER AGAIN!)