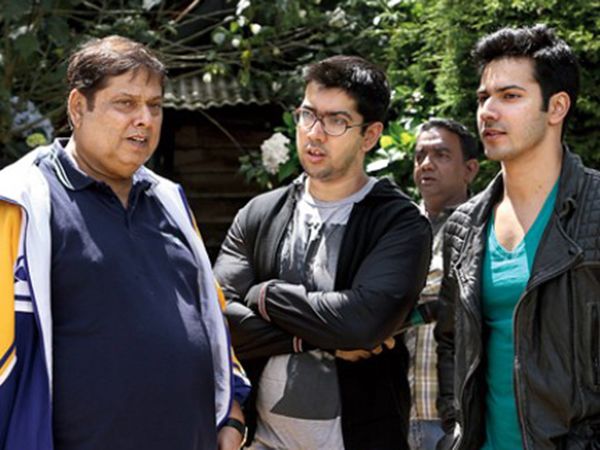 Actor Varun Dhawan, who has teamed up with brother Rohit for the first time in ‘Dishoom‘, says his brother’s style is completely different from his father, David.

The 29-year-old ‘Dilwale’ star says his father is more open to improvisations but his brother wants his artistes to stick to their characters.

“They are very different as filmmakers because my dad loves improvisation from his actors while Rohit wants you to stick to your character and he gets very upset if an actor leaves his character and starts doing anything else. He was a man possessed,” the actor told PTI

Acknowledging that rehearsing is easier, Varun says, “I’m in that sense more an actor, who loves improvisation and whatever character I’m in I like to improvise my dialogues. On the sets of ‘Dishoom’ whenever I had to improvise in the scene, it was one of the biggest tasks to convince Rohit.”

The actor has worked with his father in his second film ‘Main Tera Hero’.

The ‘Humpty Sharma Ki Dulhania’ star says it was not easy to pull-off action in 70 days “because it takes a lot of time to make an action film and Rohit has absolutely done a fantastic job.”

When asked whether he was collaborating with Alia Bhatt and Arjun Kapoor for Dharma production’s next film, he said, “No, I’m not doing any such film.”

There were reports that Alia Bhatt, Arjun Kapoor and Varun Dhawan were in negotiations with ‘2 States’ director Abhishek Varman for his next film under Karan Johar’s banner.

Varun, who has given a critically acclaimed performance in Sriram Raghavan’s ‘Badlapur’, says he will be seen doing a similar project soon.

“I would love to do such a project and I’ve also looked out for some scripts and there are certain things like that. You will see me doing the film.”

‘Dishoom’ will hit theatres this Friday. The actor will next be seen in romantic drama ‘Badrinath ki Dulhania’ alongside Alia Bhatt and is also currently filming for ‘Judwaa 2’ which is a sequel of 1997’s Salman Khan starrer.