Can You Guess Who This Bollywood Actor Is? 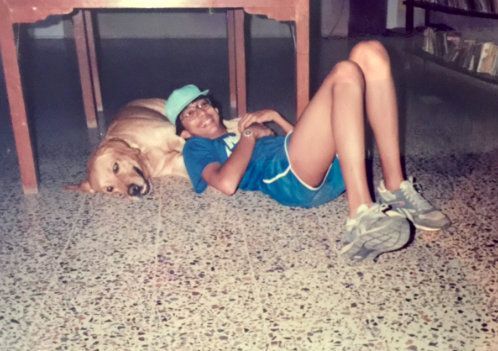 Looking at this picture, who could have imagined that the dorky, lanky teenager would grow up into a handsome movie star one day. Rahul Khanna, the famous MTV VJ turned movie star, shared this photo of his 13-year-old self posing with his pet dog on Twitter a few days back.

Now, 31 years later, a lot many things have changed, except for his love for dogs. Rahul is an ambassador of PETA, and has been actively involved in raising awareness against animal cruelty.

Despite being the son of Vinod Khanna, an actor who had a successful career in Bollywood spanning three decades, Rahul refused to become a stereotypical star kid, who tries to emulate his parent. He made his on-screen debut as a VJ with MTV Asia, and later proceeded to the silver screen. His Bollywood debut was with an offbeat flick, 1947 Earth, directed by Deepa Mehta, for which he won the Filmfare Best Male Debut Award in 1999.

Rahul, a graduate of the famous Lee Strasberg Theatre and Film Institute, New York, has also done several stage plays. He also appears in The Americans — a spy thriller TV series happening in the backdrop of the cold war era.

Rahul, who is considered a style icon, is also an avid blogger. At the age of 44, he sports a fit figure, thanks to his balanced diet, and a fitness routine that includes gymnastics, yoga, calisthenics, swimming, hiking, running, etc.